“OVERSEAS. IN ALL THEIR GLORY”: NATURAL BEAUTY EXHIBITED IN PARIS

Each year, the L’Oréal-UNESCO Rising Talents Awards For Women in Science rewards female researchers “for their distinguished career and their brilliant work”. This year, two post-doctoral researchers from Martinique were honored.

35 AWARDS ~ 686 scientists in France applied for the prize awarded each year by the L’Oréal Foundation alongside the United Nations Educational, Scientific and Cultural Organization (UNESCO). In the end, 20 doctoral students and 15 post-doctoral fellows were honored by the members of the selection jury from the Academy of Sciences. Among them, Aurélie Boisnoir and Jordane Corbeau, both researchers in Martinique. The first studies microalgae that inhabit the Caribbean Sea; the second works on seismic activity at the border of the Caribbean plate (see next article).

WOMEN’S UNDERREPRESENTATION ~ Since its creation in 1998, the
L’Oréal-UNESCO For Women in Science program has supported more than 3,000 women. “Only 36% of doctoral candidates are women, 26% of engineering students and 26% of researchers. In Europe, only 11% of senior academic positions in science are held by women,” Alexandra Palt, Director General of the L’Oréal Foundation says with regrets. This under-representation has “a concret impact,” as the awards organizers emphasize: “The lack of diversity in medical research on women’s health has led to their lesser care during the development of cardiovascular diseases The same goes for artificial intelligence, like these algorithms that reproduce gender stereotypes, because they are designed by men to serve men.”

FINANCING AND TRAINING ~ Award-winning researchers will receive a research grant of 15,000 euros for doctoral students and 20,000 euros for post-docs. They will also benefit from a leadership training program, complementary to their scientific background, in order to have the means, states the Foundation, “to more easily break the glass ceiling.”

AURELIE BOISNOIR, SOLUTIONS FOR THE CARIBBEAN SEA ~
Aurélie BOISNOIR is doing a postdoctorate at the French Research Institute for Exploitation of the Sea (Ifremer) under the supervision of Nicolas Chomérat and Jean-Pierre Allenou. Her work aims to advance research on toxic benthic “dinoflagellates” – microalgae found in the Caribbean Sea that cause health and economic problems. Few recent studies have looked at their genetic identification or the characterization of their toxins. This is now done thanks to Aurélie BOISNOIR’s research that intends to find solutions.
Through the For Women in Science program, the researcher hopes to encourage vocations among young people overseas, “so that they become aware of how rich the ecosystems that surround them are and of the need to study them in order to get to know them better, and therefore, to preserve them.” Aurélie BOISNOIR has been inspired by women throughout her career and acknowledges that scientific courses do not easily encourage vocations among women, for reasons such as the duration of studies, the precariousness of employment at the start of their career, or even the mobility imposed between contracts. Yet, she says, “Boldness and tenacity are female assets suited to scientific careers.” Her philosophy: ” failures and encounters build the mind of scientists.”
Crédits Photos : Fondation L’Oréal et UNESCO, 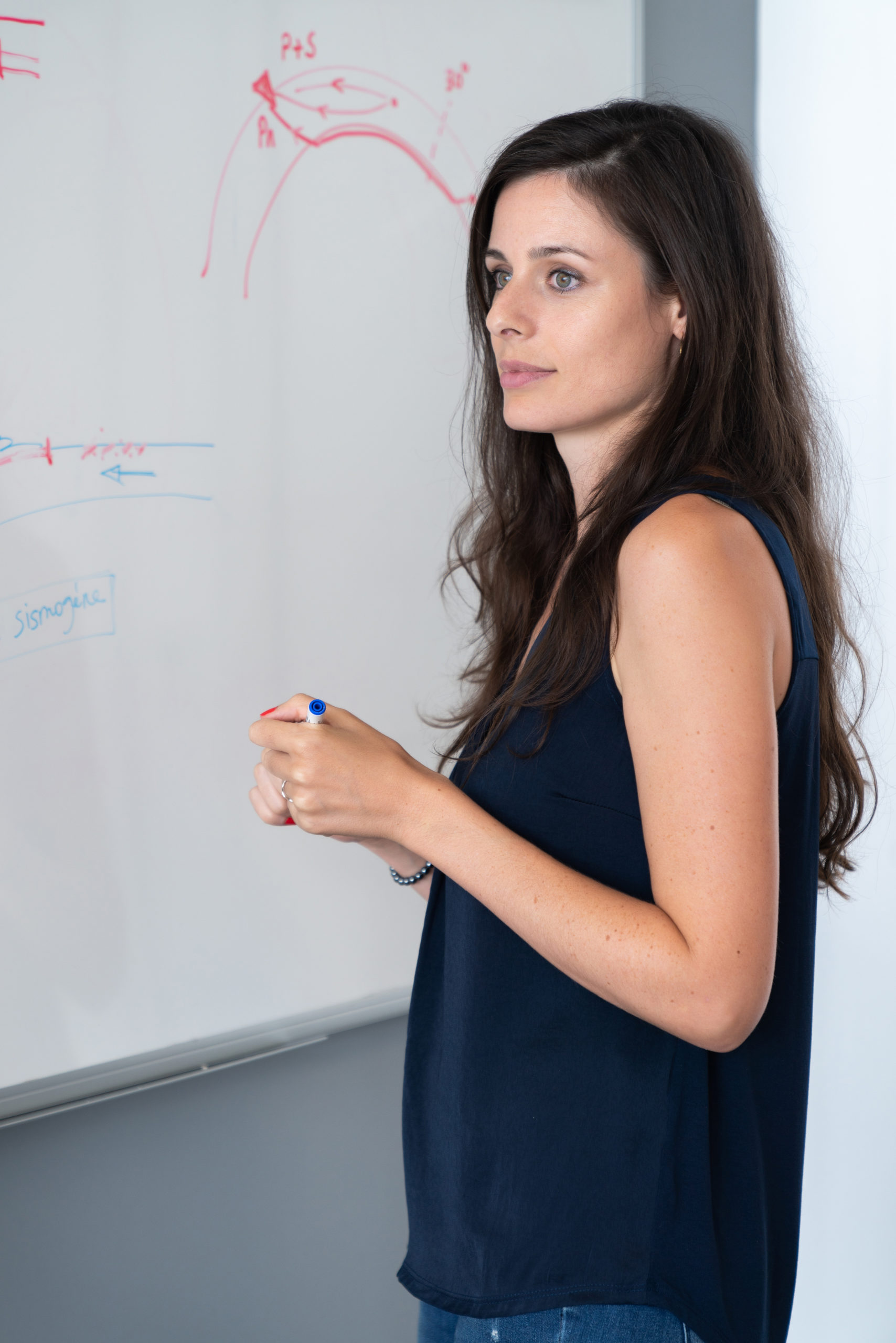 JORDANE CORNEAU, FORECASTING EARTHQUAKES BETTER ~
“”Science is a collaborative discipline which must adopt an increasingly global and comprehensive vision of the world,” says Jordane Corbeau, passionate about earth and life sciences and dedicated to geosciences. She specialized in geophysics and seismology. As part of her PhD work, she discovered the Caribbean region, with a particular interest in Haiti after the January 2010 earthquake. She is researching the dynamics of tectonic plate boundaries. After her doctorate, she joined the Volcanological and Seismological Observatory of Martinique where she continued her research on seismic activity at the border of the Caribbean plate. She analyzed catalogs of seismicity in time and space to detect potential warning signs of a major seismic failure, with the aim of
improving seismic hazard for the Lesser Antilles region. Ultimately, her goal is to use artificial intelligence techniques to process thousands of seismic records and bring out early signs of ruptures that could escape human attention.
Crédits Photos : Fondation L’Oréal et UNESCO,

EXPLORING THE CENTER OF MARTINIQUE OUT OF THE OPEN

WHERE THE SEA AND A VOLCANO CREATE ART AND HISTORY

Astride the waves at the St-Barth Bucket Regatta

You can find out more about which cookies we are using or switch them off in settings.

This website uses cookies so that we can provide you with the best user experience possible. Cookie information is stored in your browser and performs functions such as recognising you when you return to our website and helping our team to understand which sections of the website you find most interesting and useful.

Strictly Necessary Cookie should be enabled at all times so that we can save your preferences for cookie settings.

If you disable this cookie, we will not be able to save your preferences. This means that every time you visit this website you will need to enable or disable cookies again.

This website uses Google Analytics to collect anonymous information such as the number of visitors to the site, and the most popular pages.

Please enable Strictly Necessary Cookies first so that we can save your preferences!

Please enable Strictly Necessary Cookies first so that we can save your preferences!